I’m 100 miles south of the magic bus, camping in a rainforest of types; at the time of commencing this post. Very surreal situation lead me here, after leaving Anchorage a day later than planned having spent the previous day…entire day, trying to leave, Stefano and I decided to consolidate junk luggage we’re each carrying, and despite me presently not having lightened any load at all, I know for sure one entire bag of contents I’m carrying is redundant. I’ll be leaving that further south somewhere I can collect at a later time. I don’t wish to be wasteful, as all of it is genuinely good kit, just inappropriate for this trip.

We also were interviewed by Ed Gold (a journalist) about our travels, was fun to vocalize to a stranger why we do what we do, in a way, it gave me clarity on what I’m doing. 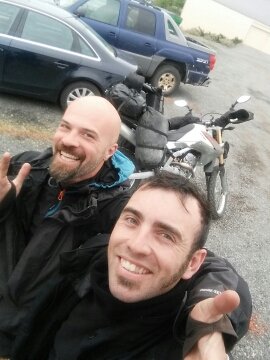 Today (4th July), after a long breakfast, further slow packing a free bbq at Alaska Leathers, independence day and all. I headed off, Stefano insisted on a farewell coffee and when all things factored in, I left Anchorage about 4pm…

Soon after leaving and before Palmer (30 miles from Anchorage) my right shoulder started feeling really tight, I pulled over for fuel and did a few stretches but just as soon as I mounted the bike again, same pain. I slowly idled up toward Denali (avoiding a great gravel route someone suggested, owing to my shoulder). I repeatedly, pulled over to mobilize my shoulder, was not acute just irritating pinch under the shoulder blade. [Note to self: why aren’t you doing yoga?]

Eventually, some 3-4 hours later in the rain I pulled off down various trails from the road to find my bed for the night, most of them useless. Finally, I got to where I am now, not before dropping the bike on a step downward wooded track, which took me 11 minutes to resolve (thankfully to GoPro, I got it on camera).

Tired, wet and sore; I hung my hammock somewhere no tent could be pitched, ready to see the bus (from the film at least) tomorrow lunch time.

Woke up 11 hours later, ground and fly still wet from the rain of last night, but not raining. Packed up and hit the road again.  Having not eaten since lunch time the day before I was a little hungry, not ravenous, just hungry.

Down the road 30 miles and the first sight of the Denali mountains appeared. I pulled over to take a drive by film, but no sooner did I pull over did a highway police trooper pull over to see if I was alright. I explained what I was doing and he left me alone.
I drove on a few more miles and was threatened by a sign “last cafe for 75 miles” I pulled over promptly and had breakfast.

An hour down the road I came across the igloo hotel, which I read about in various different places when planning this trip up north. Apparently, the hotel construction came to a halt after some construction issues with the windows had conflicted with planning regulations or something. That said, the hotel the shape of an igloo sits abandoned on the road side. However, when I arrived, it was covered in graffiti, surrounded by RVs it felt like trailer park.

I pushed on, shoulder still tight. Last night in the rain and tall grasses, I had nowhere to do any stretches. I repeatedly stopped on my way through to Healy.

I was disappointed to see the film-set bus parked in the brewery garden, ignored.

I debated what I wanted to do about seeing the real bus, I had time! I also had had many conflicting feelings; having read various articles and spoken to many different people I was torn with how I felt about going to the bus.  On one hand, the bus was THE reason to come to Alaska, but on the other hand, there was so many opposing angles, one being that getting to the bus meant very little to me emotionally in the great scheme of things. Chris McCandless inspired me in many ways, but visiting his death spot wouldn’t bring me much closer to him, if anything I’m living my dream much like he did, thus I was already closer to him than most are. Another reason against is that from what I had read in articles published this year: visitors have taken it upon themselves to take little souvenirs of the bus home with them… now years since the book and the film, every year a little bit more of the bus goes missing, that along with perpetual disregard for the environment by visitors who leave their rubbish behind.  Mostly, the strongest reason against which for me was most compelling, was the fact that 2015 has been one of the mildest winters Alaska has had in years, there has been next to no precipitation, which you’d think was a good thing, but given the hot weather, this would affect the Teklanika River  (which is a glacial river), the flow is dictated by how hot it is.  That being the case, I wrote off attempting the bus, and felt rather indifferent about it.

I got 11 miles out of Healy, and wondered if I had made too little an effort to see the bus, it had taken me literally months and thousands of miles for me to get this far, and was just driving away not even trying to see it.  I pontificated on the side of the road, and finally concluded, and stood strong with my belief that I needn’t bother. I felt good after a good talk to myself about it.
The drive into Fairbanks was a not much fun, there was a horrid haze with high barometric pressure that crushed my head, and the weather was horribly hot. I had thought to stop in Fairbanks for at least a meal, but it being Sunday evening, nothing was open, I drove into Fairbanks to look… but before I knew it I was driving out the other side having not arrived at any centre. I turned around and drove back. I stopped into a diner that was already closed and bought myself an uncharacteristic fizzy drink (I was dehydrated, hot/sweaty, and my blood sugar was hitting low).   I soon was out on the road again driving further east out of Fairbanks looking for somewhere to camp.  I spent 30 miles pulling down into tracks that ended up being driveways to houses and others to military training grounds. I finally found one that took my fancy, down a forestry trail.  I was quite far from the road and it was nice and quiet, however being the furthest north I had been thus far the sun offered me no pity at 11pm still bright skies.

I made good progress and by 11 I was in Delta Junction having an early lunch. No Wi-Fi, expensive bad food, I got on with it and carried on. The rest of the day was nondescript, I arrived in Tok some hours later hot and bothered, forest fires raging in the direction where Stefano and I had camped so that was disqualified as an option. I had a meal, used the internet, sent some postcards and headed in the direction of the border. Down various trails all were no good, or closed due to fire risk… finally, 8 miles out of Tok, I found a perfect camping spot, overlooking a huge river, and could see the smoke clouds of the distant forest fires, without fear of it bothering me.

That night, I woke up at 3:35am (being daylight) I was unsure if I had over slept or if it was the middle of the night, I started getting dressed in a panic filled with guilt of a wasted day.  I soon realized it was midnight.

I woke up that morning, unlike the day before chilly and a little later than usual, it was overcast but still fair. I rode the 8 miles back into Tok and got myself some breakfast and refuel the bike before heading off to the border. The drive beyond where I had been camping became quite smoky and soon all I could see was the silhouettes of the mountains and hills around me.
The forest fires engulfed the valleys and limited the views to just outlines. It was beautiful, yet sad.  Somewhere among this  I hit the Canadian customs, which was nondescript. I blatted through the smoke and finally found myself in Beaver Junction, eating another naff meal and listening to bikers chest-beating about how amazing they were (cue: time to get out of there).  I carried on with the goal of camping at the same spot Stefano and I had found on our way up, however no GPS coordinates and no real clear idea where exactly it was I took a guess by distance and counted the miles down from Beaver Junction.  I surprised myself recognising the turning about 10 miles before my guessed distance of where I thought it ~should~ have been.  It was one of those days, nothing really happened.

Having woken up at 4am shivering with the cold; the night before being hot I went to bed with next to no layers, by the time I got layers on and comfortable at 4am, I was wide awake. I waited a while before deciding to hit the road and getting a nice breakfast in me.  I drove 30 miles down to Destruction Bay and had breakfast with all my layers still on, hands still blue from the ride down. I extended my stay at breakfast to warm up, I managed to cut through Haines Junction in good time and refuelled before heading down to Haines. By the time I was at Haines Junction (Yukon) it was hot, however let it be no surprise by the time I was half way to Haines (Alaska) I was facing snow-like rain, gusts of icy wind that tears your core temperature straight out of you.  However, it was beautiful, so many vistas that if I had stopped for all the views I’d still be there now.  View after view of different amazing scenery, from lakes, to mountains, to wildlife to glaciers to colours to this to that to the other!  I was buzzing!   I crossed the Alaskan border again and now was in South Eastern Alaska, drove down a little way and stopped into a diner called 38 mile diner for lunch, the place was empty but the waitress was rather upbeat, we chatted while I ate, was nice to speak to someone.    I drove the remaining 38 miles into Haines by about 3pm, found my accommodation I had booked without too much hesitation and settled myself in.

After chatting to a couple in the place I had been staying who were from Spain we ended up booking a flight to see the glaciers and got a discount. It was grand!  Made a great birthday treat to myself and got to fly in the cockpit.  I really enjoyed the flight.  The ambiance of Haines really stole my attention and after spending 4-5 days there I really hadn’t accomplished much in the way of writing my blog/editing video or organising my life.   Hehe. It was nice to stop still for a change, however, usually when you do that everyone tends to distract you with things, I made a bunch of friends there, namely Len (a Norwegian/Swedish guy who shared my dorm with me), the grounds-keeper Gary we would chat all day long.

Guatemala and Back to Mexico