Hi all, I’ve been in Mexico City for a couple of weeks now, and my plans for the rest of my travels have panned out a different way.  Let me first tell you how I came to be here and then I’ll talk about what’s next.

Firstly, From Mazatlán (dying of the heat), I headed up to Durango up the autopista (a route I would have not considered the best) which I was really surprised at its beauty!  For a paid high-speed road it was tranquil and beautiful. The road conditions were great and the views spectacular. As soon as I left Mazatlán the temperature started to drop and before I knew it I was doing up zippers and wishing for my sweater which was tucked away.

The ride to Durango was quite uneventful, I recall very little of the journey, it was a bit of this and a bit of that, paying lots of small amounts of money to booths along the way for the toll road, and before I knew it I found myself at my hostel in Durango.   I was advised to take the toll road as it was faster and in fact more enjoyable, seems like the rest of the Mexican road users take the non-toll road and so takes them 6 hours over the 2 and a half hours of the toll…. the roads I hear are treacherous with idiotic truck drivers, high aggression and lots of pot holes. I kind of liked the idea of it to be honest, but figured I’d take the advice I was given.  After all the tolls weren’t much at all and the views were superb!

I spent almost a week in Durango, enjoying the cooler weather, did a few bits and bobs viewing the surrounding areas and museums and events. It was grand! It works out that Durango is Mexico’s Hollywood, and many other countries come to mexico to film on location as it offers a diverse amount of settings in a small space. It has over 100 years of film history and many of the John Wayne movies were shot there. So in true tourist style I went to a film set for the day to watch some acting. 🙂

I had a great time in Durango and I wished I had stayed longer, however, I was feeling like I was uncomfortable in my skin and itching to finally settle down and get myself into routine somewhere and earn some money.  Let it not be a surprise to you that I blew my budget by the time I got to Portland Oregon (on the way south)  I had purchased various luxuries (ferry from Alaska, upgrading my camping gear various times), and spent months longer in Canada and the USA than I had anticipated! 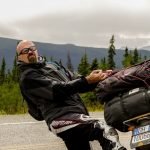 As you recall my trip up north to Alaska I met Stefano, well through a spin of strange circumstances, his little Yamaha broke down on his way up north just a few days after I left him. Between one thing and another he left his bike in storage in Alaska, bought a big Kawasaki tourer and steamed his way south.  And of all places was in Mexico City, we had been in contact and he suggested that I moved nearby and we could maybe work together (after all we’re both in the same industry).

From Durango I headed south to Zacatecas I left in the rain and it was almost poetic, I was sad to leave. On the way in the overcast weather I stopped to take a photo of the bike crossing the Tropic of Cancer… it was that uneventful.

Zacatecas is a beautiful historic city with gorgeous colonial architecture, cathedrals and beautiful stonework. I arrived early enough to walk around and take some photographs but was quite pooped from the ride in the rain and the cold that I steamed on through. I spent one night there and carried on with my mission on my way to Mexico City, (much like every other trip that comes to an “end” the last stretch feels like a race).

From Zacatecas, I headed on to Santiago de Querétaro it was a nondescript journey, I was just itching to stop already.  I spent another night in another hostel just to get close enough to Mexico City to not arrive at night.  The next morning I headed out, I made it to Mexico City in rush hour… frankly this wasn’t ideal but managed to get to Stefano’s for lunch, thankfully my trusty phone app (Osmand) got me there without too much complication.

What set out to be a very simple task of finding a suitable apartment has been a 2 week exhaustive and frustrating venture.  Between being clowned around by Airbnb hosts who cannot differentiate between shared accommodation and independent dwellings to rent, reservations that either get ignored, reservations that get accepted and then you get declined when you arrive and finally in other areas of rental, I almost got scammed out of 16,000 pesos by a fraudster offering an apartment to rent that didn’t actually exist. Thankfully I didn’t fall for the trap but had my hopes and dreams dashed by some con-artist.

Which brings you up to date. I have been living in a cheap as hell hotel in a rough-ish area of town, desperately looking for somewhere to sow seeds, and the only thing I could find was a luxury suite (studio flat) in a nice neighbourhood for an exorbitant amount of money that I could take and leave as I wished. I think in all my years of property rental in England I never paid as much as this flat in Mexico… honestly what gives?!

(Admittedly I never spent a lot on rent in England, saving for trips and all)

While based here I hope to make various exploratory trips around the area and visit places nearby between work. The other day I took a little tourism around the historic centre of mexico city and saw a bunch of things including an exhibition of the Mexican monarchy.

A Friend Visit by Sam

From Grant onto Cheyenne