Hello all, I’m in Anchorage, Alaska!  It seems to be harder and harder to keep on top of blog writing on this trip.  Ironic really, I have lots of means to being online, but finding it hard to juggle all the mediums.!

Here’s a draft I’ve started on the road in British Columbia, I’m not sure where I’ll be publishing from, but to avoid what occurred last update I’m started ahead.

From Sandy, Oregon; I had spent until 4:30am the night before editing and uploading the previous update video, I was up at 7:00am the following morning ready for Ben and Kelcy who were returning from Hawaii.

Since I was asleep deprived, I hadn’t planned many miles for that day.  I headed into Washington across The Bridge of the Gods over the Columbia River, taking in a few waterfalls on the way. From there I rode north into Gifford Pinchot forest where I camped the night in Panther Creek, just in the bush, with the sound of the river trickling by. I slept a good 11 hours that night!

From Panther Creek, I rode into Chinook Pass, the staggering tall dense trees that were breathtaking to behold actually limited my view of my surroundings, miles upon miles of winding roads. I had no concept of how high or low I was, after what seemed like hours of driving down a channel between trees.  Suddenly, I’d get a glimpse of the surrounding, and I’d be high up a mountain:

Or riding right beside water, and be oblivious to it.

After Chinook Pass, I headed to Snoqualmie and North Bend, the filming location of Twin Peaks. As a kid I loved the show, and about 15 years ago I re-watched the show, it was an ambition of mine to visit! Before I knew it, I was eating the famous cherry pie that Special Agent Anderson loved peering over the waterfall and riding the roads I recognised from the show.

I ended up camping in a camp site ten miles out-of-town, it was gigantic and empty, even the owners weren’t present, just left the only inhabitants in an RV (a retired couple: Digger & Sandy), I spent a couple of nights there to take a rest day before heading back on the road. In North Bend I had a taste explosion, not from the cherry pie, but at the North Bend Bar and Grill I was recommended the prime rib… words fail me:

Moving on; I had been in touch with Jeff, who left me a comment on my video back in February, saying “if I was passing through Everett, I was welcome to stop in“, I took him up on his offer, and was so pleased to talk to a friendly soul. He and his wife both retired, live in a lovely house with her parents in a subdivision which brings the best of both worlds, independence yet able to see each other.

It works out that Jeff is a very active man, when he’s not adventuring on his motorcycle, he could be hiking, kayaking, canoeing, cycling, playing his ukulele or a plethora of other activities he likes to keep himself occupied! When I arrived he was making a pair of beds for two of his five grandchildren. What a man!

The following morning, he helped me repair my PilotFly FunnyGo gimbal, which was falling apart. He even made me a wooden spatula for my camping utensils. 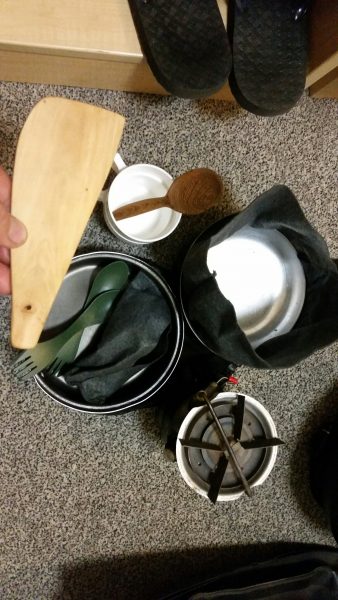 What a guy! From Everett, Jeff recommended I take the ferry and ride up to Anacortes, helps avoid the horrible coastal traffic and opportunity to see whales!   He even pre-booked my ferry for me! What a guy! The little ride through the islands was great, and made it to Washington Park (small park a short distance from Anacortes), unfortunately, it was super expensive, limited facilities, fairly poorly maintained, and busy as anything! What spoiled it for me most was the aggressive deer, literally as obnoxious as an Egyptian touting for business. One had the audacity to grab my bag of cashew nuts from my backpack on the bench while I was pitching my hammock; when I went over to grab them back, I almost had to fight the animal! Cocky thing!

With luck, I used my 4G signal to book my accommodation in Vancouver, knowing I’d not be able to use my phone while in Canada.

The following morning, woken by an obnoxious child tooting a car horn at 6am, then hearing the parents profaning in such a manner that doesn’t bode well with waking. The charade continued until after I left at 9am: verbal abuse, malicious attention seeking acts by children, screaming, things being thrown around. It was hell! Too glad to have left.

I made it to my lodging, I had booked myself into the cheapest single room accommodation in Vancouver (at least I would like to think that) at the University of British Columbia.

After three nights (intended for video editing), I found myself near tearful and somewhat suicidal! My (military grade) Transcend hard drive I’d been backing up my footage and photographs on to failed. I attempted various online guides, and I contacted the manufacturer. Meanwhile, retail therapy failed to raise my spirits; partying with several hundred Canadian dollars bought me a twin set of hard drives for future storage. And while I was at it, I figured the other thing that had made my life miserable…
To bitterly digress: my super expensive, yet utterly inept Rukka Kalahari jacket (refurbished by Rukka before departing the UK) which acted like a heavy wet sponge, and not to forget the useless Bilt 4 season riding pants that leaked disproportionately to the rain content, you’d in fact be wearing more water on your legs than what fell out of the sky.
End of bitter digestion.
I felt it was high time I looked after myself, after spending a day visiting a bunch of recommended stores in Vancouver. I found, and bought an adequate riding kit at great pain to my travel fund and wallet. Sadly, as much as I wanted to buy Klim, I didn’t like the feel or cut so went with Dianese, which I’m very happy with… for now.

From Vancouver, my wallet and I limped north stopping in Pemberton in beautiful mountains for the night, while I was in town the day I arrived I saw there was a yoga studio, I checked the schedule and saw a doable class the next morning, decided trying to lift my spirits was important while rewarding my body too.
The yoga was a great class, for a medium intensity class I found it quite intense, most probably as it was my first class since Chicago in April!! I was tight!

Heading out of Pemberton, I made a silly mistake and overlooked a road sign telling me the road I wanted to stay on was off to the right. I blindly followed the empty winding road until for tens of miles, finally I was in D’Arcy where the road came to an abrupt end. I tried to understand what had happened while trying to figure out a way to stay moving forward. Luckily, my open maps app on my phone was able to show there was a network of gravel roads that would take me round the mountains to Lillooet, ideally I wanted to make it a little further than that but after 60km of steep winding gravel roads, I was exhausted!

In Lillooet, my phone died. My charging solution wasn’t working to check where to go next. The skies grey, the town felt industrial. I felt a bit out of my depth. On the road side waiting for my phone to get a trickle of power to check the camp site situation in the area… When a couple two-up riding a tiny café racer bike pull over to talk to me, the man’s moustache gave it away, but the accent confirmed it. They were Germans! 😉 After pointing out the locally available campsites and their pros and cons they eventually told me I could just stay in their cabin for the same rate as the campsites… it worked out that Axel and Marries’s (the couple I was speaking to) place was converted into campsite, but business never took as they wanted, therefore they had camp space or a cabin for me to stay the night in…. if I wanted it!
Did I mention I also had opportunity to wash and use their Wi-Fi (where I finished my last blog post from)… No, of course I didn’t mention it!

The following day boring hundred of miles/kilometres/arbitrary unit… I managed to press on north until the mountains ended. Thankfully, there was a gravel road to break things up, from Pavilion just before the road dog legs off for a long way; I jumped on the gravel and cut off a large chunk of tar road off and came out at Clinton…. Which if I hadn’t done this I would have never been able to meet… Stefano…

So, when I was in Pemberton doing yoga, (until midday), then ate a late breakfast before setting off to Lillooet. My bike was left parked up unattended in Pemberton, where my bike received much admiration.

Stefano, who has been riding for 20 months since leaving Milan, Italy. Almost 2 years ago, riding his Yamaha WR250R has travelled the same east Africa route as I did in 2010, then taking his time rode south America; from Buenos Aires down to Patagonia then along the Pacific up.

He had admired my bike in Pemberton, confused by the Utah registration and the Union Jack and Spanish flags. At that time I was nowhere to be seen, so he pushed on. He also didn’t make my mistake of going to D’Arcy… Consequently, stopped quite a bit further on from Lillooet. Thankfully, and to my compete lack of awareness, my corner cutting managed to gain on him. Somewhere between boring miles of road, and rainfall, I saw a little bike ahead of me being overtaken… Much like my same predicament. I closed in and caught up with him. We had some elated squarks at each other through our helmets on the road side while the weather did what it did and traffic stormed by. We agreed just like that to travel together and see how it goes.

Along the way, at Teslin Lake we stopped for the night at a campsite and met a couple who were cycling.  I pointed out from a distance to Stefano that they looked Spanish, he agreed, I approached them and got talking in English before they told us they were from Spain. Juan, who had been cycling for the past 2 years set off on his way south in Chile to get to the southern most point, then decided to turn around and head north.  Along the way he met Bea (Beatriz) in Guatemala and they had spent the past year or so cycling north together.  They guys were champs!

We spent the evening with them exchanging stories and laughing about mishaps and so on. We dined fish caught from the lake that very day, Juan and Bea were keen to show us how easy it was to catch fish, moments before Stefano snagged the line on something and snapped the line… d’oh!  It was a great evening and was a highlight to some of the monotony of riding up in constant rain for days on end.

Now, 3 weeks on… No real story to tell, thousands kilometres covered, meals eaten, camp sites had we’re now parting ways as he stays on and I’m heading on to see the magic bus.

Cheyenne, Badlands and Back!