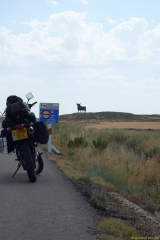 So with great joy and much research I managed to find a bargain DRz after searching about 3 months for one.  Despite high mileage and poor maintenance, the bike was only 2 years old and only 1 previous owner (not counting the guy who sold it to me, who literally bought it to resell… not sure what he was thinking but only made £100 out of me).

If you’re not familiar with the DRz, it’s the successor of the DR from the 90s, it’s a single cylinder (4-stroke) engine  with 400cc.  It currently comes in 2 flavors an enduro version and a supermoto version, although previously there was a dual-sport model. After much debating, I decided to go for the SM (supermoto) model based on the fact that it comes road-ready, a more fuel efficient carburettor, a somewhat stronger frame, and inverted front forks.

The bike is about 140KGs in weight and on average is about 33 horse power. Which if you know your figures, it is less than a third of the Tiger’s power.  However, half the weight of the Tiger too, and I can also reach the floor on it.

There were many reasons for choosing this bike over other bikes, and it partly has to do with the fact that I wanted something slower, something far more humble, and something I could fix if it went wrong.  In addition to all this, I discovered that this very idea was shared with many others who also wanted to travel far reaching distances, and the internet allowed me to discover this. The Suzuki DRz 400 has forums, and articles written all over the internet with loads of advice, tips and modifications to do to it. It also has a huge range of after-market products with adventure in mind.