So this year I am pleased to announce that I will be touring again.  I had originally planned: “North to South” Europe from Nordkapp (Norway) to Tarifa (Spain) approximately 11,000KM.  However, given our current economic crisis and the fact that I did not succeed in passing the accademic year(last year), I didn’t feel I deserved the trip. 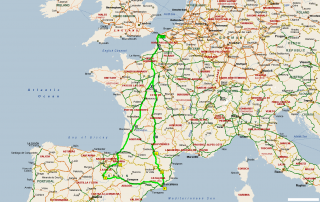 Since last year, I have got rid of the Tiger, and replaced it with a Suzuki DRz-400 SM.  The DRz is almost half the weight of the Tiger, third of the power and over half the engine size.  And prior to many of the very recent modifications was running almost twice as fuel efficient as the Tiger. However, given that I’ve just had the bike re-jetted for more power thus the efficiency will have dropped a bit.

I will be travelling this year south. I’ll be heading out on the 30th of June through France with my buddy Dan (he’ll only ride a few days with me). I’ll carry on south to to Pamplona for the San Fermí­n Fiestas hopefully stay with my friend Vidal for a few days and see Pamplona.

From Pamplona, I’ll be on to Covaleda, my dad’s birth village where most of his family live.  I have some friends out there too which I haven’t seen in almost a decade.

From there, on to Barcelona to see the sights and see a city I’ve never visited and with luck meet a friend I met at Kingston who also is a two wheeled wonder.

Finally, I’ll be attending the Horizons Unlimited Mountain Madness for a bit of a laugh near Andorra. From here, I’ll be returning home hopefully catching my ferry on the 26th of July. So far the bike is looking  like this:

However, there are still quite a few more changes needed before I set off overseas, and I’m beginning to doubt whether they’ll actually happen.