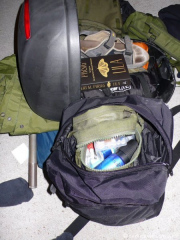 I’ve been a little busy lately, I’ve been rejetting the carburettor, installing an Acewell speedometer and snagging little things like trying to install the dirt wheels to replace the supermoto wheels.  However, the simplest of things always are the harder things to overcome. Works out that the brake discs are fitted with an inhuman amount of force and I just don’t have the strength to undo them.  Actually, I think the previous owner successfully managed to damage the heads… but let’s not go into that. 😀

So, onto packing. I have considered most sensible things… sandals, shoes and boots.. Sod everything else, soldiers march on their feet!!  Oh wait, tools, books, cooker, tent, roll mat, sleeping bag, long johns…. the list goes on.

I have this strange feeling that I’m carrying a lot more than last year, yet in less space. Although, not to be bitter or anything but I did buy 5 extra SD cards last year for photos and filming. I can only find 2 and they are the ones I already had before the 5 extras.  I’ll work something out.

Tomorrow, I’m off to try and get someone else to fit my wheels for me, simply because I don’t have the tools to remove the bloody brake discs. In such little time before departure I don’t fancy losing focus on the little problems, worst case scenario I’ll ride it supermoto.

I also hope my new chain and sprockets arrive, I had hoped they’d get here Thursday last week. Here’s to hoping!

It's been a few days…