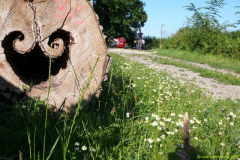 Hi! So, after starting off on a shaky start thinking Dan wouldn’t make the boat (and by the skin of his teeth almost didn’t). We finally met up after the boat started sailing. The boat was descended upon by this blinding mist and consequently we were delayed docking into Calais. It was not until after we went inland did we manage to shake the mist off.

After sampling the gruesome heat of inland did we then consider riding on the coastal roads, as far as we could; which, I have to say was beautiful.

We stopped at Boulogne for food at about 4 (local time) which was a croque madame which was absolutely delicious.

The roads were quite slow and we made very little progress and with stopping and starting with the heat, to look at the map and drinking water and stripping more and more layers.  We proceeded to ride on the D940 and then D925 until we arrived here in Dieppe at 9:30…  grand total 110 miles since Calais in about 6 hours. We’re both shattered and neither hungry although the críªpes down the road were pretty good. We’re staying in the Hotel L’europe paying an extortionate amount of money for a beach front view suite. I guess we can’t do this every night.

Anyhow, we’re hoping tomorrow will be more eventfull with some proper camping and lots of photos.  See you then!